Get the 9 Best Thanksgiving Dessert Recipes when you sign up for my newsletter! [convertkit form=3534828]
Home / Desserts / Perfectly Spiced Pumpkin Pie 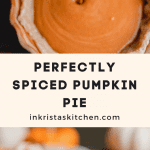 This recipe along with Apple Pie Stuffed Cheesecake make a delicious dessert duo at the holidays. These are two recipes we can’t do without!