Get 5 Fresh Strawberry Recipes for Strawberry Season when you sign up for my newsletter!
Home / Desserts / Southern Sweet Potato Pie 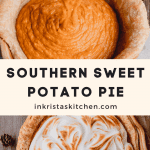 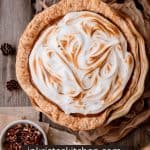 Your new favorite holiday pie might just be this Southern Sweet Potato Pie. If you’ve never tried a sweet potato pie then you’ve been missing out. It’s time to try it!

This pie is full of creamy sweet potato, glorious brown butter, a light blend of spices then topped with a toasted meringue. It will be a major hit at the holidays!

Southern Sweet Potato Pie is somewhat similar to pumpkin pie but you may like it even more. Or you can just be like me then you can’t decide so you just make both! If you’re looking for a pumpkin pie recipe I’ve got you covered with my Perfectly Spiced Pumpkin Pie!

If you’re looking for a holiday dessert that isn’t a pie then my Chewy Molasses Blondies or Pumpkin Swirl Cheesecake Bars would be perfect!

What is brown butter?

Brown butter is butter that has been melted then simmered until you start to get a whole bunch of little brown specks falling to the bottom of your pan. You’re then left with a deliciously fragrant smell that is a bit nutty and oh so delicious.

I could literally probably put brown butter on or in anything and love it! It’s just one of those things that’s like liquid gold. It pairs especially well with sweet potatoes so it makes this pie extra special.

How to make brown butter

Brown butter is made by melting then simmering butter in a sauce pot until a golden to amber color is reached. Generally a good rule of thumb is that once the butter stops bubbling and making noises it’s ready.

At that point you can see all of the little brown bits that have fallen to the bottom of the pan. The smell will be delicious. It must be removed from the heat immediately so you don’t end up with burnt butter.

After baking and cooling this Southern Sweet Potato Pie it will keep wrapped tightly in the fridge for up to 5 days. You can store the pie at room temperature for 2 days before adding the meringue to it.

I prefer to eat my sweet potato pie at room temperature. When I store it in the fridge then I let it sit out on the counter for an hour or so before eating it.

Can you freeze sweet potato pie?

Absolutely! Sweet potato pie actually freezes very well. I would suggest not adding the meringue to it before freezing.

Wrap the pie tightly in several layers of plastic wrap before freezing. If you have a 2 gallon zip lock bag then put the pie in that after it’s been wrapped in the plastic. The Southern Sweet Potato Pie will keep for up to 3 months.

If the meringue is already on the pie and you decide to freeze it that still works but chances are the meringue may not hold up well when defrosting. If that’s the case you can easily just scrape it off the top and enjoy the pie by itself or with some whipped cream added to the top!

Make the crust first. It needs to refrigerate for a minimum of 1 hour but up to 3 days. Preheat the oven to 400°F. While the crust is chilling bake the sweet potatoes for about 1 hour or until you see a brown syrupy liquid start to ooze out of the sides.

Let the sweet potatoes cool. While they’re cooling, brown your butter in a sauce pot then set aside to cool slightly.

Once potatoes have cooled scoop them out into the food processor. Blend them on low until they become creamy and you don’t see anymore strings.

When you’re ready to roll out the crust, preheat the oven to 350°F.

Roll out the crust, lay it in your pie dish then crimp the edges. You can use your fingers or a fork to do this. Place a sheet of parchment paper over the bottom of the pie, add pie weights then bake the crust for 25 minutes.

Remove the crust from the oven, remove the pie weights then set the crust aside. Mix together all of the sweet potato filling ingredients then pour the filling into the pie crust. Bake for about 1 hour until the middle is only slightly wobbly when you shake it. Let the pie cool.

While the pie is cooling beat the egg whites, cream of tartar, vanilla and salt in the bowl of a stand mixer fitted with the whisk attachment on medium speed until soft peaks form.

While the egg whites are beating heat the sugar and water in a small sauce pot until it reaches 250°F. With the stand mixer on low slowly pour the sugar mixture down the side of the bowl into the egg whites until fully mixed.

Turn the mixer back up to medium – high speed and whip until stiff peaks form. Cover the pie with the meringue and use a blow torch to toast the outside of the meringue. Enjoy your Southern Sweet Potato Pie!

If you make Southern Sweet Potato Pie please leave me a rating and/or review!

If you want all the newest recipes sent straight to your inbox then don’t forget to sign up for my newsletter! I would absolutely love you to leave me a rating or review at the bottom of this post if you make this Southern Sweet Potato Pie recipe! I love hearing feedback from everyone. Please tag me in any Instagram photos if you make my recipes, I love to see what you’re cooking! Follow along on Instagram! 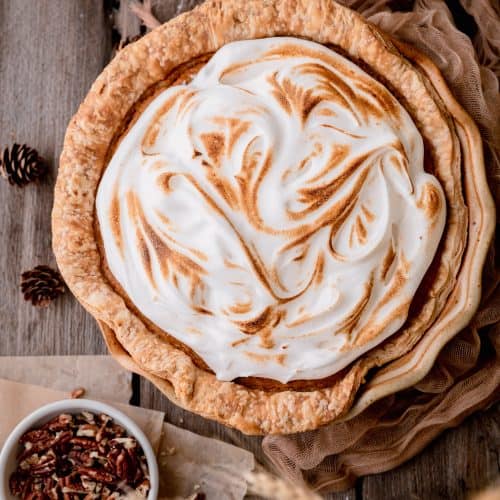 Filling and Baking the Pie