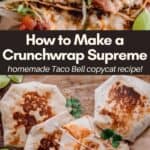 This Taco Bell Crunchwrap Supreme recipe is about to be your new obsession! This homemade crunchwrap supreme is copycat recipe with a few tweaks I made…for the better!

I’ll admit, Taco Bell is one of my guilty pleasures. It’s so bad but it’s so good! I don’t eat it much but I do get a craving for it every once in awhile and this handheld wrap is a favorite menu item. So last time I got a craving I thought, why not make a homemade version in my own kitchen?

So here we are. Delicious layers of ground beef, nacho cheese sauce, a crunchy tostada, lettuce, tomato, taco ranch and Tajin all wrapped inside a burrito size tortilla then seared until golden brown.

The best part is your whole family will agree that this is their new favorite thing. The first time I made this Taco Bell Crunchwrap Supreme recipe and my husband and kids all ate them I was jumping for joy. The kids don’t often eat what I make, they’re at very picky ages so when they do like something, it’s a great thing! IFKYK!

This is the traditional crunchwrap supreme. My recipe is very similar with a few small tweaks. I use a homemade taco ranch instead of sour cream, my ground beef has onion in it and I sprinkle Tajin on the tostadas. Small changes but very delicious changes!

How do you make a Taco Bell Crunchwrap?

First you need to make the nacho cheese sauce. Place the shredded sharp cheddar, evaporated milk and green chiles into a medium sauce pot and bring to a simmer over medium heat. Make sure to whisk occasionally so it doesn’t burn.

The cheese will eventually melt and become thick and creamy. Set it to the side until needed. Next, make the taco meat. Heat a large skillet over medium-high heat and add a little bit of oil to the pan.

Add the ground beef and onions then continue cooking until beef is fully cooked. Drain excess grease then season with taco seasoning. Stir until fully mixed.

While the beef is cooking, make the taco ranch. Whisk the ranch dressing, taco seasoning and Cholula hot sauce together until fully combined. Set aside until needed.

Begin assembling the Taco Bell Crunchwrap Supremes on a flat surface. Lay out 5 large tortillas then divide the ground beef mixture evenly in the center of each tortilla. Keep the ground beef in a diameter about the same size as the tostada is.

Top the ground beef with nacho cheese generously then place a crispy tostada shell on top of that. Sprinkle the tops of the tostadas with the Tajin then top each one with lettuce and tomato. Add some taco ranch over the top of the lettuce then lastly add the extra tortilla (see tips section) shell if the burrito shells are not large enough to fully close.

Fold the large burrito shell up and make a crease. Continue doing this all around the crunchwrap supreme until all edges are folded in and no filling is showing. Turn the crunchwrap over and place it on a sheet tray.

Heat a griddle pan or large frying pan over medium heat. Add a bit of oil then place the crunchwrap seam-side down on the pan. Cook the crunchwrap until golden brown then flip over and do the same to the other side.

You may need to lightly press down on the edges of the wraps to get them to touch the pan and brown evenly. The cook time is about 2 minutes per side.

Once they are done, place them on a large plate to serve. Enjoy!

If you love getting all the latest and greatest recipes sent straight to your inbox then sign up for my newsletter! I would love for you to leave me a star rating and/or review at the bottom of this blog post if you make this Taco Bell Crunchwrap Recipe! I’d also love if you tag me in any Instagram photos of recipes you make. I love to see what everyone is making! Follow along on Instagram! 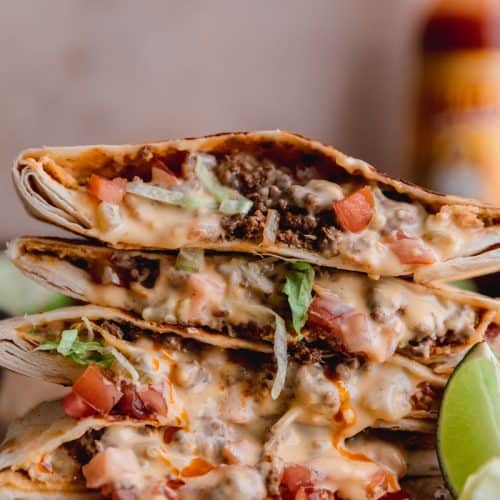