Get the 9 Best Thanksgiving Dessert Recipes when you sign up for my newsletter! [convertkit form=3534828]
Home / Desserts / Easy Coconut Cream Pie 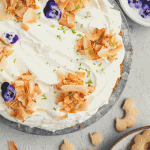 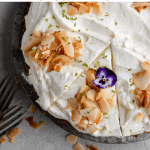 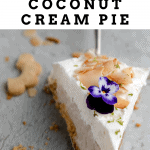 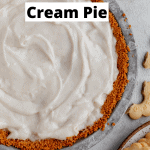 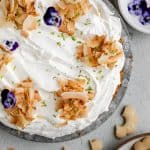 Coconut cream pie may seem daunting but with this Easy Coconut Cream Pie recipe there’s no need to worry! You’ll be making the best coconut cream pie you’ve ever made with ease! It will be a crowd favorite for sure!

Coconut cream pie has been a long time favorite of mine. With this eggless version, you don’t have to worry about your custard coming out right. Instead of eggs, I use a small amount of gelatin. Just enough to still end up with the same custardy texture you’re looking for but nothing like a gelatin!

Once you taste this pie you’ll be making it every chance you get. It’s the perfect amount of coconut and sweetness with a slightly sweet homemade whipped cream, all inside of a butter cookie crust and topped with some toasted crunchy coconut flakes. I’m drooling just thinking about it now!

Can you freeze Coconut Cream Pie?

Unfortunately Coconut Cream Pie does not freeze well. The quality does not hold up when frozen. The pie will however hold in the fridge for about 4 days and trust me, you’ll want to eat it all before that!

This Easy Coconut Cream Pie has an easy cookie crust! Add the Butter Cookies to the food processor along with the coconut flour, sugar in the raw and salt. Pulse for 5 separate 1 second long pulses. Add the melted butter and turn the food processor on low for 10 seconds.

Pour the crust mix into a 9 inch pie pan. Press down firmly, packing and spreading out evenly going up the sides of the pan. Bake the crust for 10-12 minutes, turning halfway through.

Mix 1/4 cup of coconut milk with the gelatin and set aside. Add the remaining coconut milk from the can to a medium pan on the stove top along with the half and half, cream of coconut, kosher salt, and vanilla bean paste. Cook over medium heat, whisking occasionally until the mixture starts to simmer.

Meanwhile, mix the cornstarch with 3 Tbsp cold water. Once the coconut mixture begins to boil add the cornstarch, whisking continuously. Turn it down to a simmer and let cook while whisking for 3 more minutes.

Meanwhile, while the coconut cream filling is chilling, Make the whipped cream. Pour the cold heavy cream into the bowl of a stand mixer or a medium to large mixing bowl. Beat on medium to high speed with the whisk attachment of the stand mixer or with an electric hand mixer until soft peaks form. Add the sugar and salt and beat until stiff peaks.

If you try this Easy Coconut Cream Pie recipe please leave me a rating and/or review! Also tag me in any of your Instagram photos when you make a recipe so I can see what you’ve made! 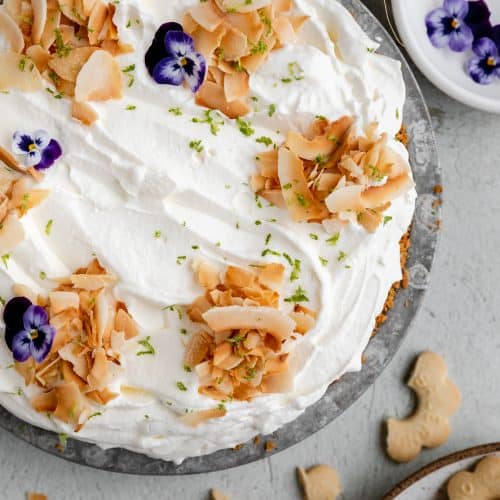 Make the crust and the garnish