Get the 9 Best Thanksgiving Dessert Recipes when you sign up for my newsletter! [convertkit form=3534828]
Home / Desserts / Easy Vanilla Brownies 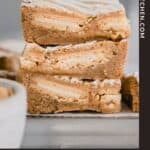 These Easy Vanilla Brownies might just be your new favorite vanilla brownies recipe. Why? They’ve got a layer of Golden Oreos in the middle then a drizzle of white chocolate on top.

You should be able to find Golden Oreos at most any grocery store now. They’re chewy and packed with a golden vanilla flavor. The best part is this easy recipe is super fun to make with the kids too.

The best brownies are topped with ice cream, so if you really have a sweet tooth then throw a scoop on top. Even better when the vanilla brownies are warm. So pop it in the microwave for 10 seconds then scoop your favorite flavor on!

If you like this Easy Vanilla Brownies recipe and you’re looking for a blondies recipe then try my The Best Blondies or Chewy Molasses Blondies!

What is a vanilla brownie?

A vanilla brownie is essentially a brownie without chocolate or cocoa powder. Also called Vanilla Blondies or Blondies. Vanilla brownies are rich in vanilla flavor.

You simply hand mix them in a bowl, they come together very quickly and have a bake time of around 40 minutes. This particular version a simple recipe with a vanilla brownie batter and a layer of Golden Oreos.

How long will vanilla brownies keep?

Cover the vanilla brownies tightly in plastic wrap and store on the counter for up to 5 days. If you wrap them then store them in the fridge they will last up to 7 days.

Another option is to freeze these Easy Vanilla Brownies. Double or triple wrap them in plastic wrap then add a layer of aluminum foil. Store them in the freezer for up to 3 months. Let them rest on the counter or in the fridge to thaw out.

How to make Easy Vanilla Brownies

Preheat the oven to 350°F then spray an 8×8 inch pan with non stick cooking spray. Put a layer of parchment paper in the prepared pan then snip all 4 corners with scissors.

Add the eggs and egg yolks one at a time, scraping down the sides of the bowl between each addition. In a separate bowl whisk together the dry ingredients. Stir the flour mixture into the wet ingredients with a rubber spatula being careful not to over mix.

The vanilla brownies will be golden brown and slightly puffed around the edges. If the brownies start to get too brown before the 40 minutes then cover with a piece of foil while still baking.

Once melted, set the chocolate mixture aside. After it cools for 5-10 minutes place it in a pastry bag or use a zip lock bag and cut the tip off. Drizzle the white chocolate over the top of the vanilla brownies then let the chocolate set.

Cut and serve the vanilla brownies! 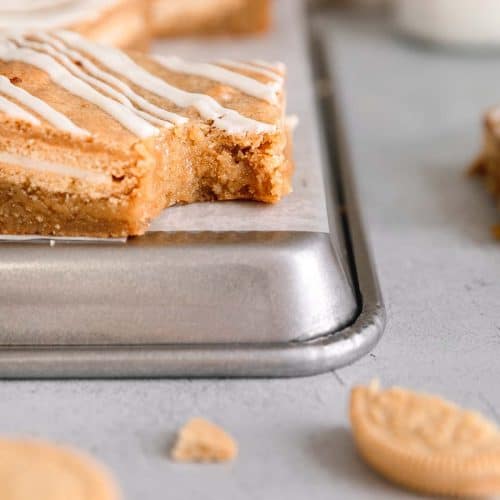