Get the 9 Best Thanksgiving Dessert Recipes when you sign up for my newsletter! [convertkit form=3534828]
Home / Dinner / Homemade Big Mac Tacos 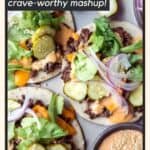 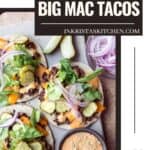 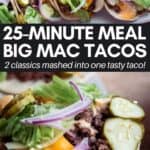 All your favorite Big Mac ingredients layered inside a soft tortilla. Two classics, one dish.

I was a little skeptical when I first heard this idea. My husband mentioned it to me a few weeks ago.

Then I thought… lets give it a try!! Oh and I am so happy I did. They’re DELICIOUS!

I was doing my happy dance while eating them in the kitchen. These homemade Big Mac Tacos are definitely a recipe the whole family will love!

Kid approved recipes are a double win because that’s not always easy!

These homemade tacos are the perfect weeknight dinner too. They’re super quick to make and fun!

This simple recipe can be made in under 25 minutes!

Other quick meals you will love

Making Homemade Big Mac Tacos is a cinch! Preheat your oven to 350°F to toast the sesame seeds.

Start by browning the ground beef in a large skillet over medium heat. Break the meat apart as it cooks.

Add 1 1/4 tsp kosher salt to the beef as it cooks. Turn off the heat and drain the grease once fully cooked.

Add the American cheese to the top of the beef, it will start to melt as it sits for a minute.

As the beef cooks make the Big Mac sauce.

In a small bowl whisk all of the Big Mac sauce ingredients together until fully combined.

Heat a medium skillet over low-medium heat. Add the sesame seeds to the pan then stir or flip them frequently until they are golden brown.

Watch carefully because they can burn easily. Remove them from the pan and set them in a small dish to the side.

Warm your tortillas in the same medium skillet with a little drizzle of olive oil over low-medium heat. This usually takes about 10-15 seconds each.

I like to sprinkle some of the toasted sesame seeds on the outside of the tortilla while it’s toasting so they stick to it. It gives these tacos that extra “Big Mac” look and taste.

Once they’re all toasted, add beef to each tortilla.

Please leave a rating and/or review!

Please leave me a star rating and/or review if you make these Homemade Big Mac Tacos! It’s super helpful for myself and any other blogger when users leave ratings and feedback, it’s much appreciated!

Gain instant access to recipes! Have recipes delivered straight to your inbox as soon as they’re published!

What kind of meat is in a Big Mac?

Beef patties are the type of meat used for a Big Mac. That’s why this Homemade Big Mac Tacos recipe uses ground beef.

To replicate the flavor. I use ground chuck which is an 80/20 beef to fat ratio.

If you prefer a lower fat ratio then you can try using ground sirloin instead of chuck. Just remember, fat=flavor.

What toppings are on a Big Mac?

A Big Mac has the following toppings:

These Homemade Big Mac Tacos contain the exact same toppings. With the exception of the sesame seed bun.

How long does it take to make Homemade Big Mac Tacos?

You can make these Homemade Big Mac Tacos in 25 minutes or less! This recipe is perfect for weeknight dinners when you don’t have a lot of time.

Bake some french fries to go along with them while you’re making the tacos. They’ll be done at the same time!

It’s a quick and easy meal that the whole family will love, kids included!

No, it is not. Contrary to popular belief, Big Mac sauce is not Thousand Island Dressing.

It does look similar and taste slightly similar but contains different ingredients.

These are the ingredients I use in the Big Mac sauce for these homemade tacos:

For the best quality, Big Mac Tacos are best eaten fresh. If you do have leftovers then you can store them in the fridge in an airtight container, or on a plate wrapped tightly in plastic wrap.

I would recommend only keeping the tacos for 1-2 days. Remove the lettuce before reheating them in the microwave then add it back on afterwards. 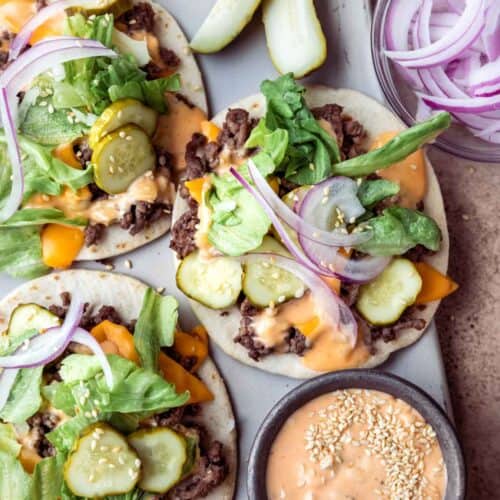