Every kid I know loves a Snickerdoodle cookie. Combine that with breakfast cereal and fun and delicious for kids and adults alike.

For other cereal inspired recipes, try my Fruity Pebbles Treats! They are seriously addicting.

The texture of the soft and chewy cookie with the fluffy frosting and crunchy cereal is a great combo! My husband basically ate the entire batch to himself.

Preheat the oven to 350°F then line a sheet pan with parchment paper.

Whisk the dry ingredients together in a medium bowl then set aside until needed.

Cream the butter and both sugars in the bowl of a stand mixer fitted with the paddle attachment on medium speed for 3 minutes. Add the egg and yolks one at a time while mixer is on low speed, scraping down the sides between each addition.

Mix in the maple and vanilla until fully incorporated.

Turn the mixer off, add the dry ingredients then mix on lowest speed just until combined. Scoop the cookies into 2oz. balls then roll them in the cinnamon maple sugar.

Place them on the prepared sheet pan at least 2 inches apart. They will spread quite a bit. Bake for 8-10 minutes then allow to cool on the pan 2 minutes before transferring to a cooling rack.

Blend the cream cheese, butter and sour cream in a medium bowl with an electric hand mixer on medium speed for 2 minutes. Add the powdered sugar, salt and vanilla then mix slowly until combined.

Turn the mixer back up to medium speed and beat an additional 2-3 minutes until light and fluffy.

Frost the top of the cookies then top with Cinnamon Toast Crunch cereal pieces.

If the Cinnamon Toast Crunch Cookies have not been topped with frosting or cereal yet then they will last on the counter or fridge in an airtight container for up to 4 days.

You can also freeze the cookies for up to 2 months before they have been topped with frosting or cereal. Place them in a plastic freezer bag, I usually use 2, and into the freezer.

Can I make Cinnamon Toast Crunch Cookies ahead of time?

Yes, you can! You can fully make these cookies up to 1 day in advance of serving them.

You can also bake the cookies off and store them separately from the frosting and cereal topping until you’re ready to serve. They can be kept in the fridge or on the counter in an airtight container for up to 3 days before topping and serving.

Absolutely! They freeze very well in raw dough balls or as baked cookies before being topped with cream cheese frosting and cereal.

If you’re freezing the already baked cookies, make sure they’ve fully cooled then place them in a freezer safe plastic bag into the freezer for up to 2 months.

Do I have to chill the cookies before baking?

Yes, it is recommended! It’s a short chilling time but it will help the dough to not spread as much and have a better consistency. Not chilling the dough may result in a flatter less desirable cookie. 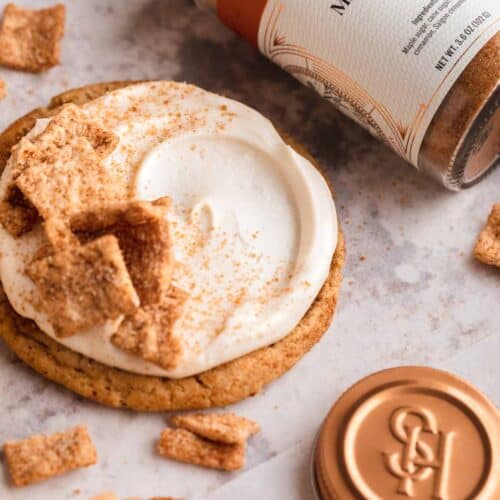