Get the 9 Best Thanksgiving Dessert Recipes when you sign up for my newsletter! [convertkit form=3534828]
Home / Breakfast / Gingerbread Cinnamon Rolls 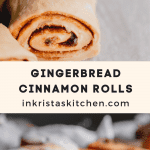 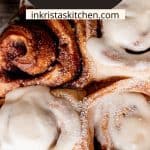 My Gingerbread Cinnamon Roll recipe is very similar to my Ooey Gooey Cinnamon Rolls with a couple spice additions and molasses. They still have that “ooey gooey-ness” to them that’s the best!

There’s nothing worse than a dry cinnamon roll. These are made to be light, fluffy and gooey. What all cinnamon roll dreams are made of!

Since gingerbread and eggnog go so well together, I decided to top them with eggnog cream cheese frosting. It’s an explosion of holiday flavor in one pan! Something the whole family will love!

Can I make Gingerbread Cinnamon Rolls ahead of time?

Yes and no. You can make the dough and roll them out up to 24 hours ahead of time then store them in the refrigerator. Take the Gingerbread Cinnamon Rolls out of the fridge for 45 minutes to let them come to room temp then let them rise in a warm spot for 1 hour while covered.

After than you can bake them as directed. If you leave them in the fridge any longer than 24 hours, I find that the quality tends to drop quickly.

Gingerbread Cinnamon Rolls and any other cinnamon roll should be enjoyed fresh out of the oven for the best experience. I keep my cinnamon rolls up to 2 days and warm them slightly in the microwave before eating them. Usually about 10 seconds per roll.

I’m kind of picky about cinnamon rolls. I don’t believe they should be eaten cold and I don’t care for them after they’re several days old. Call me crazy!

How to make Gingerbread Cinnamon Rolls

Warm your water to 110°F-115°F and whisk brown sugar in until dissolved. Sprinkle the yeast over the top, cover the bowl with a kitchen towel then set in a warm place for 10 minutes until yeast is frothy.

Meanwhile, stir together the milk and vinegar until thickened slightly then add the oil, egg and salt to the bowl with the milk. Whisk these ingredients together.

Once the yeast is frothy then add in the milk mixture and whisk to combine. Add about 3/4 of the flour to the yeast mixture and begin mixing. I like to use my hands to do this.

Once the flour is about 75% mixed in then add the remaining flour and mix until dough just starts to form a ball.

Place dough ball in a lightly greased bowl, cover it with a kitchen towel then let it rise for 60 minutes in a warm place.

While the dough is rising, mix the brown sugar, cinnamon, ginger, nutmeg, cloves, allspice and salt together in a small bowl and set aside. Then you can make the frosting while the dough continues to rise.

Beat the cream cheese and butter together in a bowl with an electric hand mixer or alternatively in the bowl of a stand mixer with the whisk attachment on medium speed for 2 minutes. The mixture should become light and airy.

Add the vanilla and sifted powdered sugar. Mix together on low until combined then on high for 2 more minutes. Slowly mix in the eggnog until fully combined. Add nutmeg if desired.

After the dough has risen turn it out onto a lightly floured surface. Knead the dough 3-4 times then roll it out into a rectangle that is about 1/8-1/4 inch thick.

Smear the room temp butter all over the dough, sprinkle with the brown sugar spice mix then drizzle with molasses. Starting on a long end, roll the dough tightly into a log.

Cut the dough in half then cut each half into halves. You should have 4 sections of dough at this point. Then cut each section into thirds. This will give you 12 Gingerbread Cinnamon Rolls.

Set the rolls in a lightly sprayed dish, cover with a kitchen towel and let rise in a warm place for 45-60 minutes. Preheat the oven to 350°F then bake for 20-25 minutes.

If you make this Gingerbread Cinnamon Roll Recipe please leave a rating and/or review!

If you want all the newest recipes sent straight to your inbox then don’t forget to sign up for my newsletter! I would absolutely love you to leave me a rating or review at the bottom of this post if you make this Gingerbread Cinnamon Roll recipe! I love hearing feedback from everyone. Please tag me in any Instagram photos if you make my recipes, I love to see what you’re cooking! Follow along on Instagram! 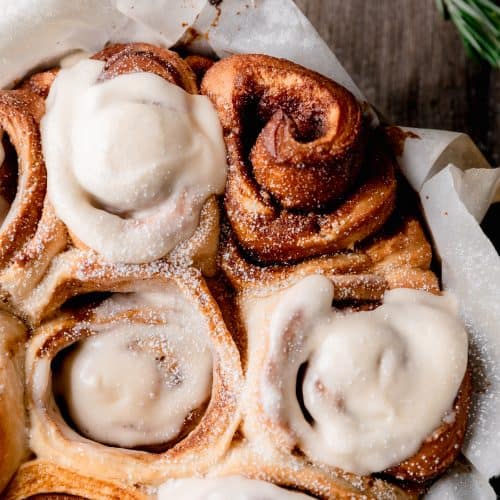 Baking time could vary depending on the pan you use and how tightly the rolls are packed in together in the pan. For the 20-25 minute baking time I used a 13×9 pan.