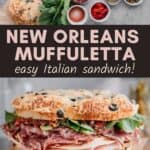 If you’ve never had a New Orleans Muffuletta then now is the time to try. Homemade olive tapenade, provolone cheese, Italian cold cuts then topped with lettuce on a round Sicilian style bread or focaccia.

This sandwich has big flavor and is an easy recipe. Some eat it cold, some like it hot. You’ll love it either way! It makes a great addition to a Mardi Gras menu.

The Muffuletta Sandwich originated in New Orleans at Central Grocery.

You can read more about this in this article.

What is a New Orleans Muffuletta?

The New Orleans Muffuletta was created at Central Grocery in New Orleans by Sicilian farmers. It consists of Italian cold cuts, olive tapenade, provolone cheese that is placed inside of a round Italian bread.

The bread is usually covered in sesame seeds but there are other variations.

The Italian cold cuts used are most commonly any combination of the following:

The two most common cheeses used on a Muffuletta are:

The olive salad is a blend of olives, peppers, spices, vinegar and oil.

How to make a New Orleans Muffuletta

This New Orleans Muffuletta is an easy sandwich to make. Start with the olive tapenade. Place all of the tapenade ingredients into the blender then pulse until blended but still a little chunky.

Slice the round loaf of bread in half. You can dig a little of the bread out of the center if you don’t like that much bread. Spread the olive tapenade over each side of the bread.

Layer the Muffuletta with provolone cheese, capicola, mortadella and sopressata. Top with lettuce then place the top of the bread back on the sandwich.

Cut the sandwich into four pieces and serve!