Get the 9 Best Thanksgiving Dessert Recipes when you sign up for my newsletter! [convertkit form=3534828]
Home / Desserts / Raspberry S’mores 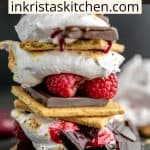 If you’ve ever been a fan of chocolate and raspberry, these Raspberry S’mores are your dream come true! This is not your average s’more, this is an upscale adult version of a s’more. You can enjoy these in the comfort of your home or take them to your next party!

There are endless different ways to create s’mores. This was another recipe I created when Ghirardelli and The Feed Feed were having their S’more Contest.

I’ve linked both chocolate squares here if you’re unsure what they are.

Making your own marshmallow fluff

Relax, take a deep breath. This is actually way easier than you think. Making your own marshmallow fluff is quick and simple. It only takes about 5 minutes.

Add the water, sugar and light corn syrup to a heavy bottomed medium sized sauce pan. Whisk the ingredients together, bring to a boil and keep it boiling until it reaches 240°F.

In the mean time while the sugar mixture is coming to temp, add your egg whites to the bowl of a stand mixer (or a bowl with a hand mixer) and whip with the whisk attachment until foamy. Add the cream of tartar and salt. Beat on medium high until soft peaks are formed.

Make sure the sugar mixture is at 240°F, remove it from the heat and slowly drizzle it into the egg whites while beating on low speed. Once all of the sugar mixture is in return the mixer to a medium – high speed and beat until stiff peaks form. Add the vanilla and raspberry sauce then mix until fully incorporated.

How to make Raspberry S’mores

Putting the Raspberry S’mores together is a piece of cake! On top of one piece of graham cracker add one square of Raspberry Radiance, 3 – 4 raspberries, raspberry marshmallow fluff, a square of Dark Chocolate Raspberry and top with a graham cracker. Simple as that and they’re ready to enjoy!

If you make this Raspberry S’more recipe please leave a rating and/or review! I would really appreciate it! And as always please tag me in your Instagram photos when you make a recipe, I love to see what everyone is making! 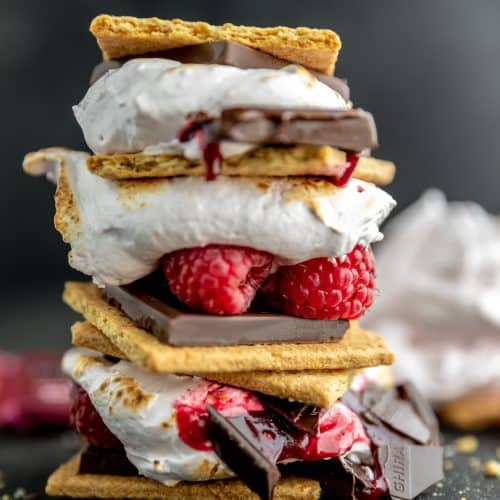 You will have leftover vanilla marshmallow fluff. A few things you could use this for are: other s’mores desserts, peanut butter and fluff sandwiches, ice cream topping, rice krispie treats, fluffernutter cookies, marshmallow fluff brownies or on top of your hot chocolate!