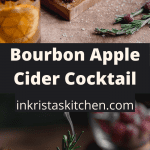 The holidays are here and a Bourbon Apple Cider Cocktail is just what you need! I love apple cider during the fall and winter season. Mulling it with cinnamon, cloves, allspice and oranges makes it even better!

Then the addition of bourbon?! Yes, please. You’ve got my heart. This is a super easy cocktail that can be enjoyed hot or cold!

These Bourbon Apple Cider Cocktails have a splash of ginger beer for a little extra kick too. Ginger is one of my favorite flavors and it definitely goes well with apple cider and bourbon. They’re perfect for any fall or winter occasion!

What kind of bourbon should I use?

You can use any bourbon you’d like! I’d suggest using a mid-range bourbon, you don’t want something too cheap and poorly made. You also don’t want to be mixing your expensive bourbon, that’s made for sipping by itself!

I used Makers Mark 46 because that’s what I had on hand and it worked well. You can use bourbon, whiskey or a dark rum if whiskey isn’t your jam.

Heat the apple cider, cinnamon sticks, allspice, whole cloves and orange slices in a medium sauce pot until it boils then reduce to a simmer or just below for 20 minutes. Strain the apple cider through a fine mesh strainer then cool completely.

If you are making warm Bourbon Apple Cider Cocktails then skip the cooling step and just set the apple cider aside until needed.

Fill a cocktail glass with ice, bourbon, mulled apple cider then ginger beer. Stir the cocktail around then add a lemon wedge to the rim. Cocktail can be garnished with cinnamon sticks, orange slices or cranberries if you like.

If you’re making a warm Bourbon Apple Cider Cocktail then skip the cooling step and skip the ice. Enjoy! 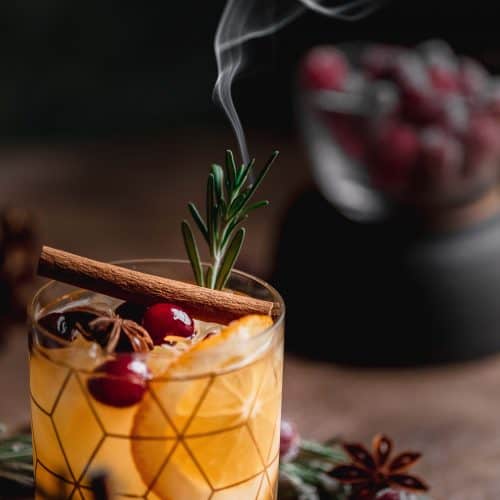